The expedition TRANSDRIFT VIII took place from August 20 to September 27, 2000. 18 scientists from Constance, Kiel, Moscow, St. Petersburg and Tiksi participated in the expedition. One of their main tasks was to obtain sediment cores in order to find evidence of the existence of submarine permafrost in the Laptev Sea. For this purpose, two Russian research vessels were used: RV Yakov Smirnitskiy and the drilling vessel Kimberlit. In addition, the seasonal variability of environmental parameters in the Laptev Sea were to be investigated.

At three stations, sediment cores with a total length of 40 m and a drilling depth of up to 26 m were obtained. At two of these stations permafrost soil was found at depths between 7 and 12 m below the seafloor. This result had not been expected as it had been surmised according to seismic records, obtained during the TRANSDRIFT V expedition with RV Polarstern in 1998, as well as model calculations that permafrost would be found at significantly greater depths.

Onboard Yakov Smirnitskiy, comprehensive oceanographic, geochemical and biological measurements were carried out at 48 stations. At three stations the diurnal variability of environmental parameters was measured for a time period of more than 30 hours. These data will provide a validated basis for modeling of the modern environment in the Laptev Sea. 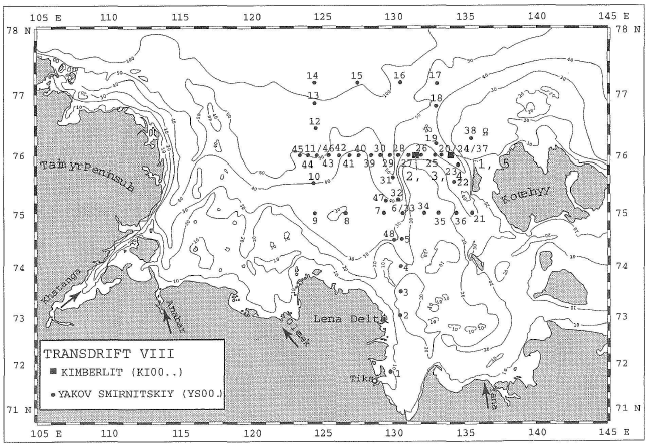