The TRANSDRIFT VII expedition aboard the Russian research vessel Yakov Smirnitskiy (August 19 to September 16, 1999) focused on the evaluation of seasonal environmental changes in the Laptev Sea. Comprehensive oceanographic, geochemical, and biological measurements were carried out. In addition, two long-term oceanographic bottom stations (ADCP stations) were recovered.

For the 16 scientists aboard Yakov Smirnitskiy, the highlight was the successful recovery of the two autonomous long-term ADCP stations LENA and YANA. Both had been deployed during the TRANSDRIFT V expedition aboard RV Polarstern in 1998. For 13 months, they recorded 1.6 million data of current, temperature, salinity, ice coverage, as well as oxygen and particle concentration measurements. Thus, continual observations covering all seasons succeeded for the first time. The short-term data of the former TRANSDRIFT expeditions can now be put together to form a whole picture of the seasonal variability. Even the period of the long Siberian winter – nearly nine
months –, during which ship-based expeditions are made impossible by an ice cover of a thickness of up to 2.5 m, can now be investigated. First evaluations of these data, which outclass all expectations, show, among other findings, an intensive daily rhythm of small crustaceans in the water column: at night they feed at the surface and during the day, they migrate into deeper regions in order to protect themselves against predators. This phenomenon was even registered during the polar night. In addition, the stations recorded for the first time in detail the transport pathways of suspended material. Close to the seafloor, there is a nepheloid layer, up to 5 m thick, of diverse particles and small animals, which moves from the Lena Delta towards the Arctic Ocean, at times reaching high velocities. This result was also confirmed by underwater cameras and optic probes.

Due to good ice conditions, samples could be taken for the first time in the otherwise inaccessible northwestern Laptev Sea. It is surprising that in addition to typical Arctic communities, biological indicators for both river water and Atlantic water masses were found there. How, for instance, shrimps and mollusks manage the long way from the Atlantic Ocean to the Laptev Sea shall be discovered by the analysis of the oceanographic and hydrochemical data.

On the whole, the working program focussed on the usage of modern measuring instruments. A large amount of various environmental parameters in the water column and at the seafloor was recorded in high resolution. For the first time, we succeeded in recording important key elements that make a realistic modeling of modern environmental conditions possible. In this context, the results of the ADCP stations, which reliably worked for more than a year, are of particular importance. Moreover, the measuring instruments of the ADCP stations were again deployed after a short check, among other purposes, in order to register the runoff rates of the large Siberian river systems. This will enable us to describe the complicated interaction of the different water masses in the Laptev Sea and to record the transport of, e.g., nutrients and sediment deposited at the seafloor. The evaluation of this considerable amount of data will take its time but even now it becomes obvious that the Laptev Sea environmental system is very sensitive to changes. 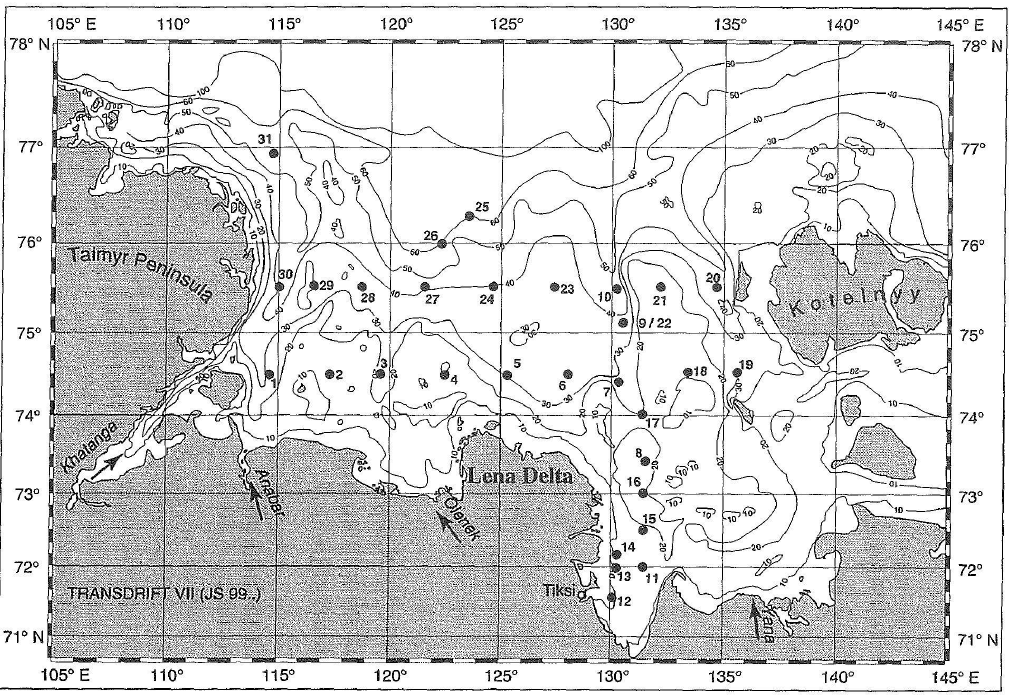