The TRANSDRIFT IX expedition was carried out aboard RV Ivan Kireyev from August 29 to September 4, 2003. The research program during the expedition focused on recent processes influencing the stability of the submarine permafrost and on bacterially influenced processes of its biogeochemical cycles. Multidisciplinary experiments were performed comprising:

One of the major tasks was the investigation of the complex interaction between atmosphere, water column and seafloor/submarine permafrost. For this purpose two seafloor observatories were deployed for a period of one year to monitor the seasonal variability in surface-sediment temperature and in oceanographic parameters within the water column. They are to be recovered during the TRANSDRIFT X expedition in 2004. This somewhat extensive working program for the comparably short period of ship time could be carried out due to fairly calm weather conditions. South-easterly to south-westerly winds prevailed with an average wind speed of 6.1 m/s. The air temperature varied from 2 to 6°C with a mean of 4°C.

The weekly reports of the expedition can be found here.

The main task during the TRANDRIFT IX expedition was to deploy two seafloor observatories to study the seasonal variability in temperature and salinity distribution within the water column, interacting processes in the transition zone water column/sediment and in the current system, as well as the transport processes for the period of one year. One of the seafloor observatories was deployed in the nearshore area north of the Lena Delta to characterize processes in an onshore/offshore environment and within the frontal zone of the Lena River (LENA 03). To study changes in the hydrodynamic system and its interaction with the seafloor, the second seafloor observatory was deployed in the mid-shelf area (YANA 03).

The seafloor observatories are each equipped with four sediment thermometers, an Acoustic Doppler Current Profiler (ADCP), a Conductivity Temperature meter (CTD) and two CTDs in combination with turbidity meters. The CTDs are deployed at defined water depths (LENA 03: 2, 10, and 15 m above seafloor; YANA 03: 2, 10, and 20 m above seafloor) along a sensor string to detect fluctuations in temperature and salinity within the water column. The sediment thermometers record the temperature from the sediment surface up to a depth of 70 cm to determine the heat flux between the water column and the seafloor. The bottom-moored upwards-looking broadband ADCPs monitor the current speed and direction of the entire water column to reconstruct the origin of warmer bottom waters. ADCP measurements at both stations will be carried out at intervals of 1 minute and averaged over 30 minutes in different depth cells.

To investigate the influence of interactions between seafloor, water column, and atmosphere on the stability of the submarine permafrost, relevant parameters in the water column and of surface bottom sediments were determined along a grid of 22 long and short-term stations on the eastern Laptev Sea shelf. Three long-term stations (at least 18 hours) were located in the vicinity of the seafloor observatories to calibrate the one-year records after recovering them during the TRANSDRIFT X expedition in 2004. Measurements with a CTD in combination with a turbidity meter were carried out to obtain data on the distribution of temperature, salinity, and suspended particulate matter (SPM) within the water column. Water samples of about two liters each were collected with Niskin bottles from defined water depths. These water samples were filtered through pre-weighed HVLP filters by MILLIPORE (0.45 microns) to obtain the concentration of suspended particulate matter (SPM). All turbidity meter measurements were correlated with corresponding filtered water samples. A strong correlation was observed (r= 0.801; p= 0.01; n=84). Due to the linear relation between turbidity measurements and filtered water samples, optical backscatter signals could be translated into SPM concentrations (SPMoptical). Complementary surface bottom-sediments were sampled with a small sediment grab to determine surface temperatures (depth: 0-10 cm), pore-water salinity, and grain size parameters. The long-term stations and the seafloor observatories were connected by a SW-NE transect of short-term stations for a better spatial representation. Additionally two transects of short-term stations crossing the river front of the River Lena were carried out.

A total of 52 CTD casts and 113 water samples were obtained during the expedition.

Hydrochemical structure of the water column

To investigate the structure of the water column and to track dynamic processes in the coastal Arctic Ocean, the chlorinity and the distribution of silicon, phosphorus, and inorganic nitrogen compounds were to be determined. Vertical profiles (5 m sampling interval) from the surface down to the seafloor were taken along a grid of 22 stations. Water samples were taken with a 2-liter plastic water sampler (PWS). From the PWS about 130 sub-samples were taken and stored frozen in high-density polyethylene bottles. Analysis will be carried out in the Otto Schmidt Laboratory for Polar and Marine Research (OSL) in St. Petersburg. Chlorinity will be determined by means of ion chromatography. The determination of nutrients is based on automated continuous flow-analysis.

The main task was the sterile sampling of submarine permafrost to determine the microbial nitrogen cycle. Sampling was focused on the diversity of nitrifying bacteria, which were to be examined with several microbiological techniques. Eleven sterile sediment samples were taken from aerobic habitats and prepared for transport at in situ temperatures. Various samples were taken from the water column at various depths and filtered (0.2 µm cellulose/acetate). In addition, specialized polycarbonate filters were used for microscopy and FISH (Fluorescence In Situ Hybridization).

In order to get an idea of the cell quantity, the MPN (Most-Propable-Number) technique was used. Physiological and molecular-biological characterization of the cultures was planned to be carried out at the Department for Microbiology (Hamburg University). 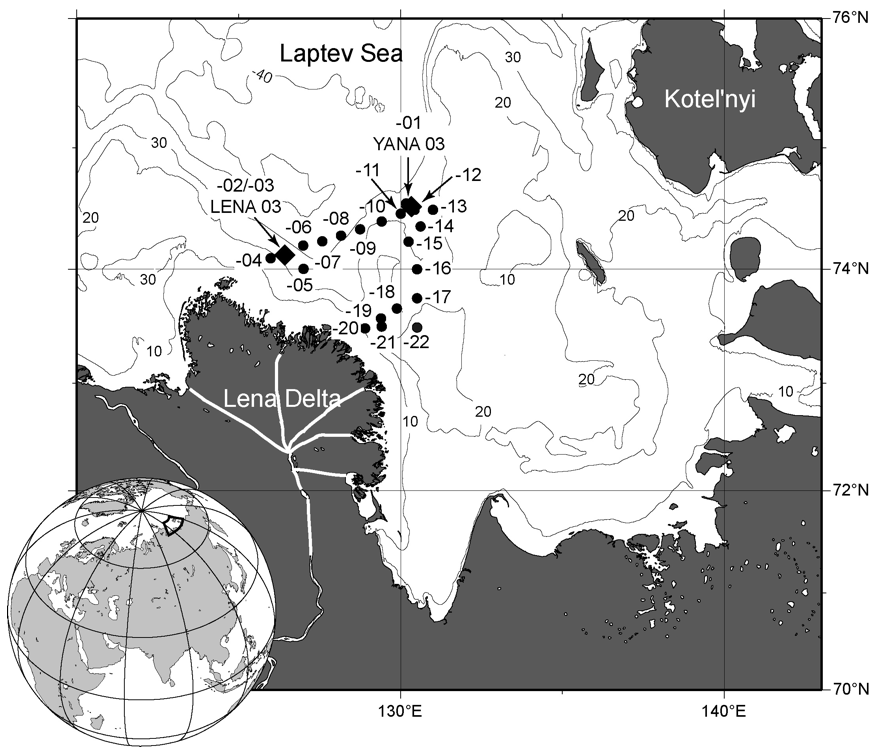