The foundations for the bilateral cooperation in the Laptev Sea were laid during the workshop "Russian-German Cooperation in and around the Laptev Sea" held in St. Petersburg from May 10 to 13, 1994. The Arctic and Antarctic Research Institute in St. Petersburg and the GEOMAR Research Center for Marine Geosciences in Kiel were responsible for the organisation and coordination of the TRANSDRIFT I expedition, which was funded by the Russian and German ministries for research and technology.

Thirteen Russian and thirteen German scientists participated in the expedition onboard Ivan Kireyev, a Russian research vessel belonging to the Hydrographic Department of Arkhangelsk. Together they carried out a comprehensive meteorological, oceanographic, chemical, biological and geological working program.

TRANSDRIFT I was part of the joint Russian-German expedition ARCTIC '93. At the same time, the German RV Polarstern of the Alfred Wegener Institute for Polar and Marine Research was working in the pack ice of the northern Laptev Sea as well as in the eastern Nansen Basin. The interdisciplinary research programs of Polarstern and Ivan Kireyev were closely coordinated.

The scientific goal of the TRANSDRIFT I expedition was to investigate the Arctic environment and its significance for global climate. Investigations of the atmosphere, water column and seafloor were carried out in order to gain a broad view of the environment of the Laptev Sea. The working program was conducted at 98 stations in total in the shelf area, including those located at river mouths. The biological, chemical and geological works focussed on 47 stations.

RV Ivan Kireyev departed from the port of Arkhangelsk on August 2, 1993, and three days later crossed the ice edge of the Kara Sea where the Russian icebreaker Taymyr was already waiting to assist. In a convoy both ships then sailed for two days through Vilkitsky Strait. Reaching the Taymyr Ice Massif, Taymyr was relieved by the icebreaker Rossiya, which escorted Ivan Kireyev into the ice-free southern Laptev Sea. Due to excellent weather conditions and perfect Russian logistics, the ship reached the working area in the record time of only seven days, so that, much earlier than anticipated, at 11:15 pm on August 8, 1993, the research activities started in the vicinity of the ice edge in the western Laptev Sea. Following seventeen days of work in the southern Laptev Sea, Ivan Kireyev arrived to Tiksi on August 24 in order to load fuel and water. The scientific team took the opportunity to visit the Hydrographic Department and the Lena Delta Reserve.

In general, the first leg of the cruise was successful. Thanks to very good weather and ice conditions, the working program could be carried out at 49 stations, thus making it possible to complete a large portion of the total working program already during the first leg. Due to heavy ice conditions, however, the planned stations in the Khathanga mouth area and in the region of the Taymyr Ice Massif had to be cancelled.

On the afternoon of August 27, Ivan Kireyev left Tiksi to continue the working program in the ice-free southern Laptev Sea until August 30. During this time ice conditions in the northern Laptev Sea began to improve, and Ivan Kireyev left the southeastern Laptev Sea on August 31 to head north. On September 1, a brief rendezvous with Polarstern took place at 76'30'N and 133'20'E in order to calibrate oceanographic tools. After the meeting, the expedition works continued southwest of Kotelnyy Island where two mooring stations were deployed. On September 11 and 12, the research team was forced to discontinue all station work due to a severe storm and to seek shelter between Kotelnyy and Belkovsky islands. On September 13, the third mooring station was deployed and the geological working program was terminated. After that Ivan Kireyev sailed further north to the ice edge in order to carry out high-resolution measurements with one-mile intervals along two ten-mile-long transects.

On the evening of September 14, the working program was finally completed and the ship sailed for Tiksi, from where the German scientists flew back home on September 19. One day later RV Ivan Kireyev returned with ice breaker support through Vilkitsky Strait. On September 23, the ship met with Polarstern once again west of the Taymyr Peninsula in order to exchange Russian and German cargo. After a final stop in Yenisey Bay to store freshwater, Ivan Kireyev returned to Arkhangelsk. On her way, six additional oceanographic stations were carried out in the Kara Sea. Ivan Kireyev finally arrived to Arkhangelsk on October 5. During the two months of successful work in the Laptev Sea, 29 samples for Cs analysis, 20 samples for Sr analysis, and 21 samples for 3H analysis were collected. For the Cs analysis, bottom samples were taken with a box core up to a depth of 10 cm below seafloor at most of the 35 geological stations.

The scientific report of the expedition can be downloaded here.

The weekly reports can be read here.

The participants of TRANSDRIFT I: 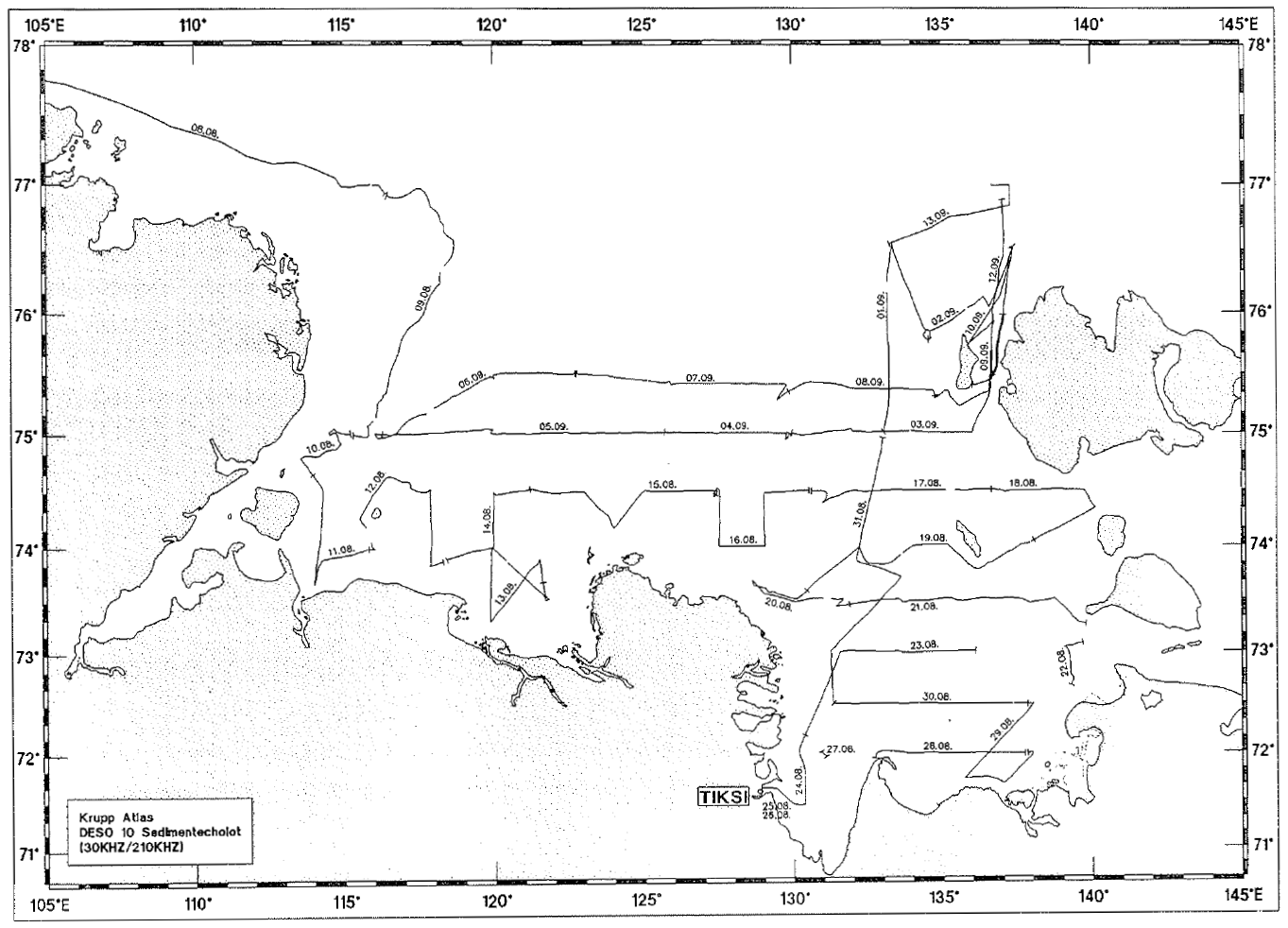 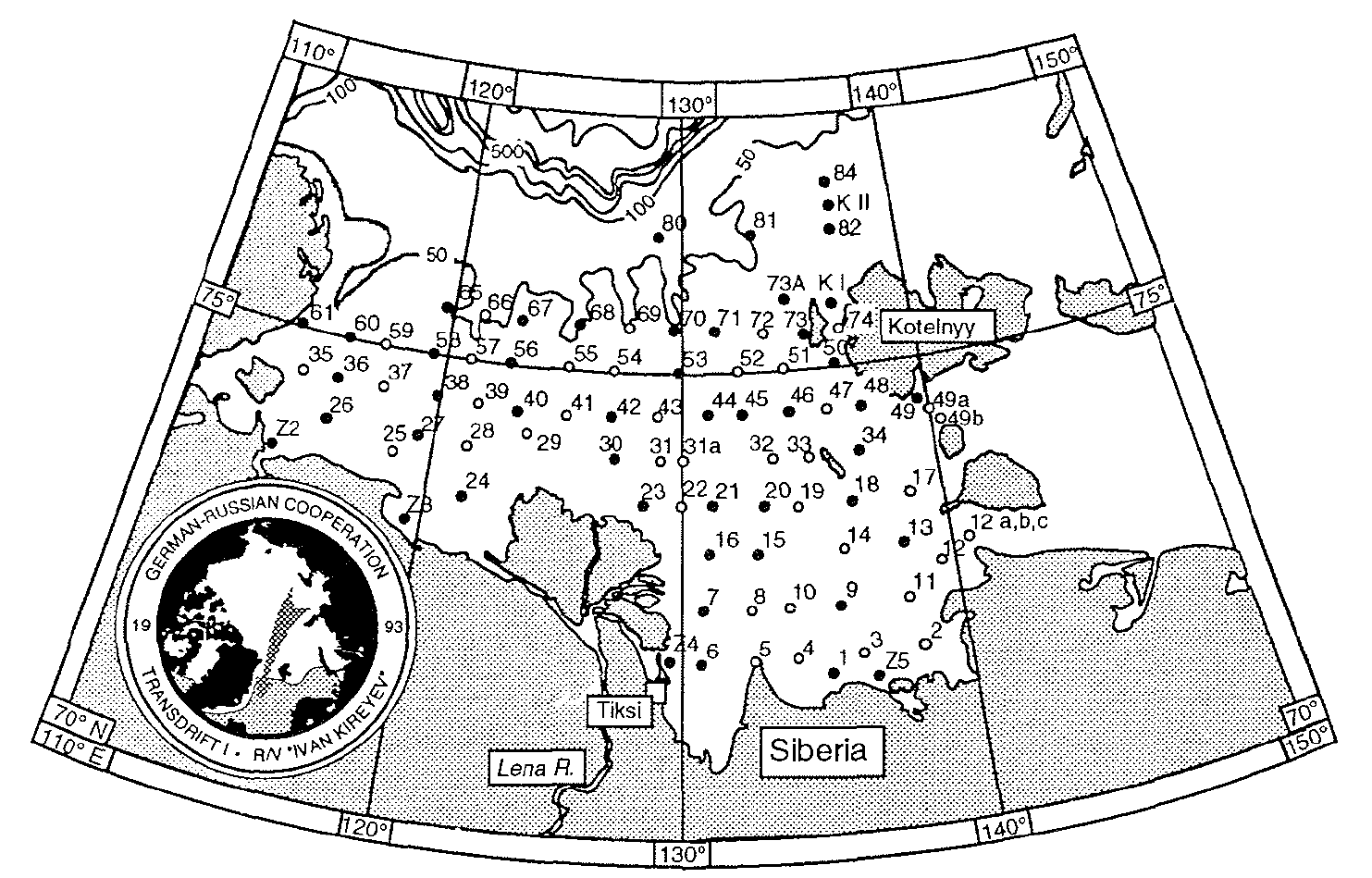