Long-term and paleoceanographic changes of the Arctic climate system

In recent years, several studies have identified a dramatic shift in hydrographic fronts within the central and eastern Arctic. Simultaneously, Atlantic-derived water has significantly increased its presence in the eastern Arctic. This oceanic shift has been associated with a reorganization of the large-scale sea-ice drift, including the eastward deflection of the Transpolar Drift Stream. Such changes may have a significant effect on the heat, sea-ice and freshwater budgets of the Arctic Ocean. The long-term variability of the Arctic transpolar system will be assessed using historical data in statistical models (1950s to present). In addition, scenarios for the future development of the Arctic Ocean hydrography will be investigated. Analytical results (proxy data) from sediment cores will allow extending our knowledge of the oceanic environment in the research area and ocean/atmosphere feedbacks beyond the range of historical oceanographic measurements and into the period when the anthropogenic influence on the Arctic and global climate was negligible. Of particular importance will be to investigate intervals when natural forcings (e.g., insolation, total solar irradiation) caused warming in the Arctic (e.g., in the Early Holocene, during the Medieval Climate Anomaly). These warm periods may serve as analogs for the Arctic transpolar system as it may prevail under progressive future warming. 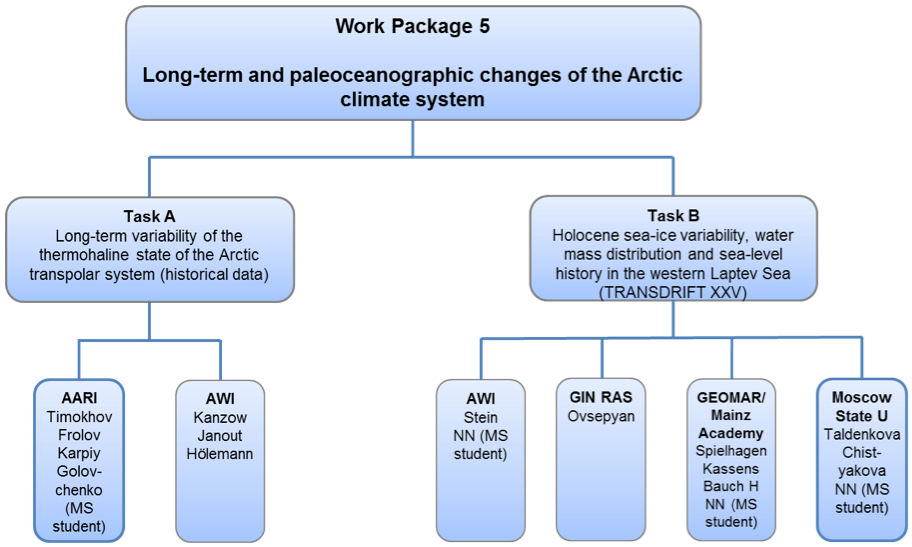