Biogeochemical cycles in the Laptev Sea

The retreat of sea-ice and changes of the freshwater budget in response to warming have already significantly affected Arctic marine productivity. In some regions, an increase in marine primary productivity was observed. This is because the availability of nutrients, which ultimately limits or amplifies primary productivity, is not well understood. Thus, the exact nutrient supply paths and changes of biogeochemical cycling as a consequence of sea-ice loss, increasing freshwater discharge from Arctic rivers and other environmental parameters in the Siberian Arctic, affecting the nutrient budgets, require detailed investigation. A central issue is the role of river water in controlling nutrient availability, given that river discharge is one of the main sources of nutrients on the one hand but at the same time reduces their vertical exchange due to the induced stratification of the water column and, thus, limits nutrient supply to the photic zone. This work package aims to assess the variability of the biogeochemical cycles of nutrients and their linkage to the hydrochemical and oceanographic structure of the Laptev Sea in order to identify the main mechanisms that control the supply, distribution and utilization of nutrients, as well as their relationship to changes in water-mass distribution and freshwater pathways and to the sea-ice cover on the Laptev Sea shelf. This project will form the basis for a better understanding of the biogeochemical cycles of the Laptev Sea, assess their response to climate forcing and improve the understanding of potential feedbacks to future environmental changes. 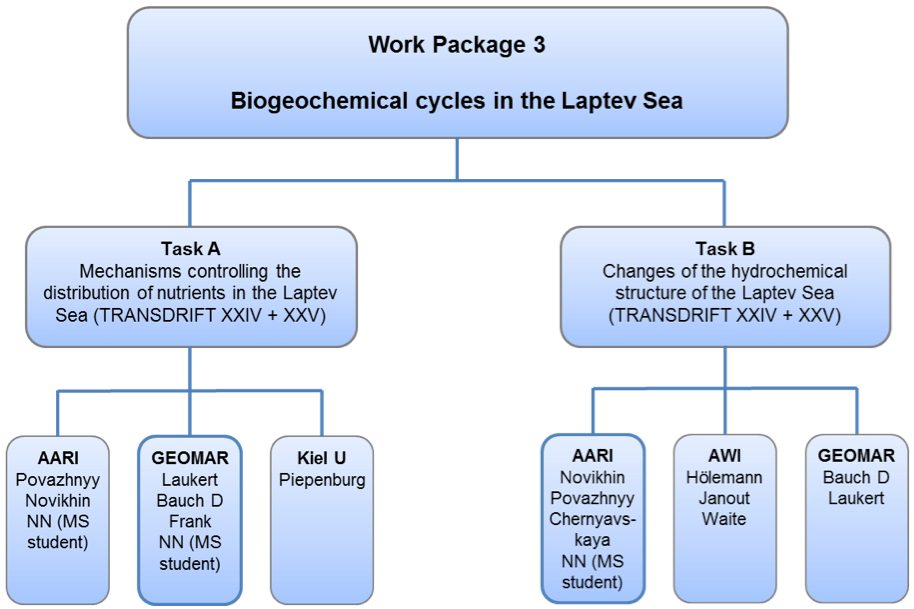