The Transpolar Drift system is the dominant component in the Arctic Ocean and relevant for global climate. While climate change has been shown to affect the Arctic ice cover through in-creased northward atmospheric heat and moisture transport, the role of oceanic heat on sea-ice loss is far less understood. The Laptev Sea is the beginning of the Transpolar Drift system and features strong ice formation and large rivers on the vast shelves while the Arctic Boundary Current carries heat along the continental slope sufficient to melt the entire Arctic ice cover if released to the surface. Particularly important are the regions north of Severnaya Zemlya and the northwestern Laptev Sea where the Arctic Boundary Current loses a con-siderable amount of heat during its eastward propagation. This may be linked to shelf-basin interactions although few specifics are known due to the lack of detailed observations. This work package aims at better understanding the relevant physical processes that govern the distribution of freshwater, ocean heat and sea ice. Building on results from the "Transdrift" project, the proposed project will emphasize the poorly understood small-scale mixing and exchange processes, which often enhance uncertainties in numerical models due to coarse resolution and less than ideal parameterizations. Hence, shedding light on this poorly under-stood Arctic Ocean key region where the beginning of the Transpolar Drift system meets the Arctic Boundary Current may help to reduce uncertainties in predictions of the future state of the Arctic sea-ice and climate system. 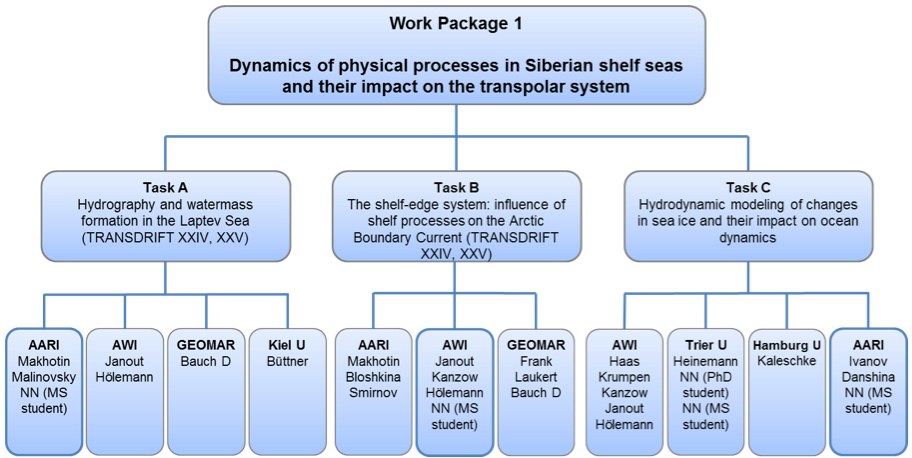